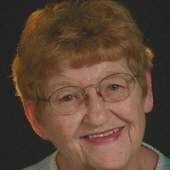 Marlene A. Jorgensen, age 80, of Weyauwega, went to her heavenly home on Sunday, March 20, 2016, at Bethany Home in Waupaca. She was born on January 9, 1936, in New London, daughter of the late Ralph and Genevieve (Surprise) Buelow. Marlene graduated from New London High School. She worked at various jobs, eventually getting her CNA license. She enjoyed reading, bowling, playing darts and also crafts.

She was preceded in death by her parents, husbands, Mayford Fahser and Larry Jorgensen; brothers, William Cornell and Charles Buelow, and a sister Joyce.

A memorial service for Marlene will be held at 4:00 p.m. on Friday, March 25, 2016, at the Cline-Hanson-Dahlke Funeral Home in Weyauwega with Pastor Rich Engle officiating. Burial will be in Most Precious Blood Cemetery in New London. A gathering of family and friends will take place on Friday at the funeral home from 2:00 p.m. until the time of the service.

A special thank you to Bethany Home for their wonderful care of Marlene during her final hours.

To order memorial trees or send flowers to the family in memory of Marlene A. Jorgensen, please visit our flower store.