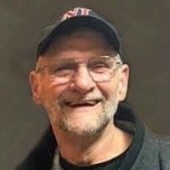 Mark Steven Zielke, age 64 of Manawa, passed away tragically on Sunday, August 11, 2019 at his home. Mark was born on June 1, 1955 to the late James and Betty (Lepak) Zielke in Appleton. He was united in marriage to Gwinette Williams on December 3, 1977 at St. Mary Magdalene Catholic Church in Waupaca. Together they celebrated 41 years of marriage. Mark enjoyed woodworking and cabinetry, cutting wood, volunteering for 4-H, drinking coffee, listening to WDUX and umpiring co-ed softball games. Everyone enjoyed his sense of humor. Mark found so much joy in his grandchildren and would drop anything to be with them!

The Memorial Mass for Mark will be held at 11:30 a.m. on Tuesday, August 20, 2019 at Most Precious Blood Catholic Church in New London with Fr. John Kleinschmidt officiating. A gathering of family and friends will take place from 9:00 a.m. until 11:15 a.m. directly at the church.

“When the sun goes down and the moon and stars appear- look up to them and the first star you see by the moon- that is Mark watching over us! If the stars are not out- he is napping!”

“Watch out for angel kisses”

In lieu of flowers a memorial fund has been established at ANY Community First Credit Union- MEMORIAL FOR THE FAMILY OF MARK ZIELKE- MEMBER #120105592 https://www.communityfirstcu.com/

Most Precious Blood Catholic Church
To order memorial trees or send flowers to the family in memory of Mark Zielke, please visit our flower store.