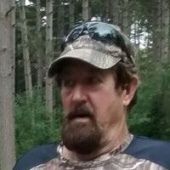 Mark James Seeger, age 69, of Ogdensburg passed away on Wednesday, August 18, 2021. He was born on February 13, 1952 in Milwaukee, Wisconsin to the late James and Ursula (Kirsch) Seeger. He lived in Jackson, Wisconsin and went to school in West Bend until the end of his Junior year. His family then moved to the Ogdensburg area and he attended his Senior year at Manawa where he graduated from Little Wolf High School. On December 2, 1972 he married Sharon Pethke the love of his life and best friend at Zion Lutheran Church in Manawa. He worked as a construction worker for 10 years and then worked alongside his father and brother Jon, on the Seeger Dairy Farm for 40 years. He was involved in farming until his last days.He enjoyed hunting deer and ducks, cutting wood,chasing coon and coyotes with his hounds and spending quality time with his grand kids.

In lieu of flowers, a memorial fund has been established to .
Online condolences can be given at www.clinehansondahlkefuneralhomes.com