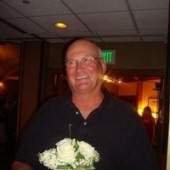 Mark H. Shockley, age 62, Manawa, died unexpectedly on Wednesday, October 12th. Mark was born in Beloit, WI on February 7th, 1954 to Shirley (Peters) and Charles Shockley. He graduated from Beloit Memorial High School in 1972 and went on to trade school to become a lineman. He was united in marriage to Cathy (Toler) in Janesville, WI in 1973 and together they raised three children. While he loved being a dad, he discovered his true love and enjoyment in life when he became a Papa to his six grandchildren. Mark was employed by Alliant Energy for the last 42 years before his retirement this year. He was actively involved in the community by serving as a member of the Manawa Lions Club, Manawa Masonic Center, Manawa United Methodist Church, and the Manawa School Board.

A gathering of family and friends to celebrate Mark’s life will take place on Saturday, October 15, 2016 from 3-5 p.m. at the Manawa Masonic Center. The Cline-Hanson-Dahlke Funeral Home in Manawa is serving the family.

To order memorial trees or send flowers to the family in memory of Mark H. Shockley, please visit our flower store.