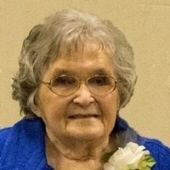 Marion (Midge) Ruth Feldt (Johnson) age 91 met Jesus face to face November 29, 2016. Midge was born in Appleton to August and Sophronia (Whitman) Johnson on January 30, 1925. She graduated from Menasha High School. Midge was united in marriage to Paul Raymond Feldt on May 31, 1945 and they shared 56 years of marriage and brought 8 children into the world. In 1967 Paul and Midge moved to Weyauwega and operated Diamond Shoe Stock Farm. Midge had a quiet gentle spirit, she was known for her excellent abilities as a seamstress. Besides farming, she also worked for her father and brother as a bookkeeper at Johnson’s Auto Service. Midge enjoyed sewing, knitting and crocheting, she made sure to crochet an afghan for each of her children and grandchildren. Midge was instrumental in organizing and starting the Johnson family reunion.

A memorial service celebrating Midge's life will be at 12:00 noon on Saturday, December 3, 2016 at Calvary Chapel in Waupaca (615 W. Union St.). Pastor David Goyke will be officiating. Friends and family may gather at the church from 10 a.m. until the time of service. Interment will be in Highland Memorial Park in Appleton.

The family wishes to thank Crossroads Care Center of Weyauwega for their love and care of Marion over these past years.

To order memorial trees or send flowers to the family in memory of Marion 'Midge' Feldt, please visit our flower store.