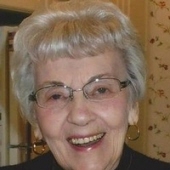 Marie "Chris" J. Squires Age 91, of Manawa, went to her heavenly home on Tuesday, July 21, 2015 at St. Joseph Residence in New London. She was born on May 19, 1924 in Chetek, Wisconsin, the only child of the late Reuben and Sydna Christensen. From infancy she lived in Amery, Wisconsin and graduated from High School there in 1942. After graduation, she attended River Falls State Teacher's College where she attained a three year teaching diploma in 1945. Her first teaching position was for two years at Black River Falls where she met the love of her life, Bill Squires. They were married November 22, 1947 at the Congregational Church at Amery. Following their marriage, they moved to Manawa becoming parents of three sons: Larry, Dave and Rick. Through the years, Marie was a Cub Scout Den Mother, a Methodist Church Sunday School Teacher, a Past Worthy Matron of the Eastern Star, a member of the Manawa Federated Women's Club, and did volunteer work for her church and community. She enjoyed doing crafts. After graduating from Steven's Point College, in 1966, with a B.S. Degree, she taught school for the Marion and Manawa School Districts for a total of 23 years, retiring in 1986. After her retirement, she and her husband Bill became very active in Beja Shrine Temple and visited many states and places and met some wonderful people until Bill's death in 1996 after the couple had been married 49 years. She is survived by her three sons: Larry (Eileen), Manawa; Dave (special friend Jody), Appleton; Rick (Cindy), Manawa; 5 grandchildren and 10 great-grandchildren: Carrie Bodenburg and her children: Billy and Caitlyn, Eau Claire; Dan (Angelia) and their sons: Jack and Owen, Appleton; Sara Squires (Chad Buchholz) and their daughter: Brielle, Appleton; Abby (Phil) Stuebs and their children: Gabriel, Ava, Julian, Amelia and Bernice, Reedsville; Anna Squires, Glendale. She is further survived by a sister-in-law Mary Ann Koeller (like a sister), nephews Tom (Karen), Brian (Susan), and Jim Squires, also a friend and ex daughter-in-law Cathy Squires. Besides her parents and husband, she was preceded in death by her brother and sister-in-law Bob and Nancy Squires (like a brother and sister). The funeral service for Marie will be held on Saturday, July 25, 2015 at 11:00 a.m. at the Manawa United Methodist Church with Rev. Steve Rice officiating. Burial will be in Little Wolf Cemetery, Town of Little Wolf. A visitation for Marie will be held directly at the church on Saturday from 9:00 a.m. until the time of the service. In lieu of flowers, memorials are preferred for the Manawa United Methodist Church. A special thank you to the staffs at St. Joseph Residence and also Heartland Hospice for their care and concern of Marie.

To order memorial trees or send flowers to the family in memory of Marie Squires, please visit our flower store.