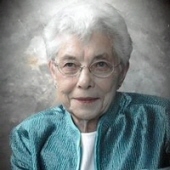 Marguerite “Marge” E. Gilbertson, age 93, Weyauwega, passed away on Monday, October 30, 2017, at Park Vista, Waupaca. She was born on April 9, 1924, in the Town of Lebanon (Waupaca County), daughter of the late Paul and Minnie (Gresen) Mittelstaedt. She attended Lebanon Consolidated School and then graduated from Manawa High School in 1942. On September 20, 1947, she was united in marriage to Nathan Gilbertson in Oshkosh. Through the years she worked at the Weyauwega Cleaners, Don Radtke Real Estate and retired from the Wisconsin Veterans Home in King.

Funeral services for Marge will be held at 11:30 a.m. on Friday, November 3, 2017 at St. Peter Lutheran Church, Weyauwega with Pastor Dennis Lemke officiating. Visitation will be held directly at the church from 9:30 a.m. until the time of service. Burial will be in the Oakwood Cemetery, Weyauwega.

The family would like to sincerely thank the staffs at both Park Vista and ThedaCare Hospice for the tender, loving care shown Marge.

To order memorial trees or send flowers to the family in memory of Marguerite E. Gilbertson, please visit our flower store.