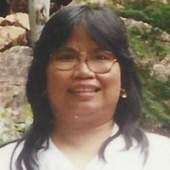 Malou L. Handrich, age 61, of Weyauwega, went to her heavenly home on Sunday, August 27, 2017, after a two year battle with cancer. She was born on December 8, 1955 in Cebu, Philippines. On March 15, 1989 she was united in marriage to Dennis Handrich. Malou worked as a teller at both M & I Bank and First National Bank in Weyauwega. Malou enjoyed touring most of the United States with Dennis throughout their 28 ½ years. They frequently visited the Philippines where she has many surviving family, friends and neighbors. She was a member of St. John Lutheran Church in Baldwins Mill.

She is survived by her husband Dennis; two children: Tammy (Tye) Ortega: grandchildren, Olin and Sena Bob (Jessi) Handrich; grandchildren: Skyler and Storm; sister-in-law and brother-in-law: Sally (Sheldon) Otto. She is further survived by nephews Nolan and Ryan Gutierrez and their families, nieces and cousins.

She was preceded in death by her parents and siblings.

To order memorial trees or send flowers to the family in memory of Malou L. Handrich, please visit our flower store.