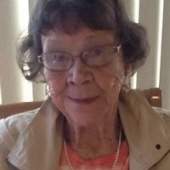 Mabel Mary (Mae) Paschke, age 96, passed away on Wednesday, January 13, 2016, at Pinecrest Nursing Home in Merrill. She was born in West Bloomfield on June 4, 1919, daughter of the late Otto and Martha (Magdanz) Strey. She married Harold Paschke, who preceded her in death in 1972. They lived in Weyauwega. Mabel loved the game of golf, was an expert bridge and sheepshead player, and was an avid Packer and Badger fan. She served her community for many years as a Red Cross volunteer and 4H leader. She was a hard worker and held various jobs throughout her life beginning as a hairstylist for Sally's Beauty Shop on Main St., Weyauwega, and finally her last job at Royal Oaks Golf Course, Waupaca.

A graveside service at Oakwood Cemetery, Weyauwega is planned for sometime next summer. The Cline-Hanson-Dahlke Funeral Home, Weyauwega is in charge of arrangements.

Special thanks to her loving caregiver and friend, Sherry Riddle and to all the staff at Pinecrest and Marshfield Clinic for their care and concern of Mabel.

To order memorial trees or send flowers to the family in memory of Mabel Paschke, please visit our flower store.