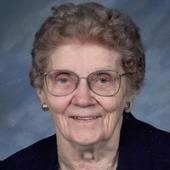 Mabel F. Chich, age 104, of Manawa, went to her heavenly home on Monday, March 13, 2017 at St. Joseph Nursing Home in New London, just 26 days short of her 105th birthday. She was born on April 8, 1912 at Bear Lake, Waupaca County, daughter of the late Otto and Emma (Pelzer) Handrich. On December 19, 1936, she was united in marriage to Louis Albert Chich. He preceded her in death. Mabel was a member of St. Paul Lutheran Church in Manawa where she was active in the ladies aid and their quilters group, where she enjoyed attending bible classes. Mabel loved gardening and baking. Her greatest joy though was her family.

Besides her parents and husband, she was preceded in death by her twin brother Elmer Handrich, a brother Gordon Handrich and two sisters Viola Olson and Rose Tessen, also a son-in-law Don Mertes.

The family would like to thank the staff at St. Joseph Residence for their care and kindness of Mabel.

To order memorial trees or send flowers to the family in memory of Mabel F. Chich, please visit our flower store.