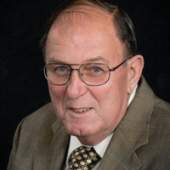 Lowell Dean Prellwitz, 82, entered into his eternal life on Thursday, December 5, 2019, after a lengthy illness. He was born on March 20, 1937, in Clintonville, Wisconsin, the son of the late Martin and Lillian (Janske) Prellwitz.

Lowell graduated from Little Wolf High School, Manawa, Class of 1955. Following graduation, he served with the U.S. Army where he was stationed in France from 1955-1958. He married Geraldine S. Huettl, the love of his life, on June 27, 1959, and celebrated their 60th Wedding anniversary this past June. Lowell was employed by Neenah Foundry in the Quality Assurance Division until his retirement in 1993. He was a past member of Knights of Columbus serving as a Grand Knight. He was a spiritual man and involved in many activities at Sacred Heart Church. Lowell enjoyed his civic duties for the Township of Little Wolf and served as a supervisor for many years.

Lowell was a devoted husband, father and avid outdoorsman. He particularly enjoyed hunting with his friends, grandsons, and sons-in-law who all appreciated his breakfast cooking skills before (or sometimes during) the hunt. Upon his retirement from the Neenah Foundry, he became the local “Handyman” for whoever needed something fixed whether it be the local bank, a neighbor, or his daughters. As a problem solver and master of all things mechanical, he could fix nearly anything. He was even known to walk his daughters through home or car repair projects over the phone. Lowell was insistent that his daughters knew how to fish, play cribbage and “fix stuff” on their own. His passion was woodworking and he particularly enjoyed gardening and raising chickens and rabbits. When he wasn’t fixing things or tending to one of his many projects, Lowell enjoyed traveling around the U.S. with his wife in their 5th Wheel including a four-month trip to Alaska. He will be deeply missed by his wife, daughters, extended family and many friends.

In addition to his parents, Lowell was preceded in death by two sisters, Betty (Prellwitz) Nowicki and her husband Tom, Carol (Prellwitz) McNulty, brother Gary and his wife Joan and brother-in-law Wayne Riste.

The Funeral Mass for Lowell will be held at 11:00 a.m. on Friday, December 13, 2019, at Sacred Heart Catholic Church in Manawa with Fr. Matthew Rappl and Fr. Xavier Santiago concelebrating. Burial will be in the parish cemetery. Visitation will take place on Thursday from 5-8 p.m. at Cline Hanson Dahlke Funeral Home in Manawa and again at the church on Friday from 9:30 a.m. until the time of the service.