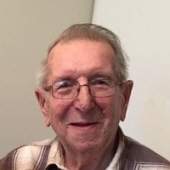 Louis F. Peters, age 86, Waupaca, passed away suddenly at his residence on Thursday, July 28, 2016, following a 12 year battle with cancer. Louis was born on December 9, 1929 in Racine, WI son of the late Arthur and Myrtle (Doney) Peters. Louis moved to the Royalton area as a child. He served his country in the US Marine Corp from 1948-1950, during the Korean War, and then in the reserves from 1950-1962. On February 9, 1971, Louis was united in marriage to Lenora Doris Schuelke in Waupaca. She preceded him in death in 2007. He worked for Murphy Construction, New London and then as an over the road truck driver for Duschek Trucking, Waupaca, Campo Trucking, Neenah, Tradewinds Inc., Manawa, Meinerz Creamery, New Berlin, Hilker Turcking, New London, Post Crescent and Ort Turcking, New London until his retirement in 1998. He was awarded a safe driver award from the state of Wisconsin and logged in over 4.5 million miles. Louis enjoyed flower gardening and raising dogs. Louis was a handyman who could build anything. He enjoyed working on his farm and watching the Green Bay Packers. He was a member of the St. Peter Lutheran Church, Weyauwega.

A Memorial service for Louis will be held at 11:00 a.m. on Thursday, August 4, 2016 at St. Peter Lutheran Church, Weyauwega with Rev. Newlin Schafer and Rev. Dennis Lemke officiating. Visitation will be held at the church on Thursday from 9:00 a.m. until the time of service. Full military rites will be held.

The family would like to thank all the staff at ThedaCare Regional Medical Center, Appleton, also the staff of ThedaCare at Home Hospice and the doctors and staff at Ministry Clinic, Waupaca.

To order memorial trees or send flowers to the family in memory of Louis F. Peters, please visit our flower store.