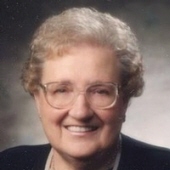 Lorene Sylvia Kusserow Age 93, of New London, went to her heavenly home on Saturday, June 27, 2015 at Appleton Medical Center. She was born on June 19, 1922 in the Town of Maple Creek, the second daughter of the late George and Lenora (Gerks) Pribbernow. She was baptized on July 22, 1922 by Rev. T. Brenner. She was confirmed in 1935 at Christ Church in Maple Creek. Lorene attended Golden Hill School through the 8th grade and graduated from Washington High School in New London in 1939. She worked in the Edison Wood Products office until her marriage to Arthur Kusserow on November 22, 1945. He preceded her in death on December 4, 2007, after 62 years of marriage. Since her marriage to Arthur, she was a member of Emanuel Ev. Lutheran Church in New London and belonged to the Ladies Aid, LWMS, was a long time attendee of the morning breakfast Bible class, and also a member of the Golden Hill Homemakers. She worked at various jobs after her marriage and in 1977, she and her daughter Bev Knudsen purchased The Lamplighter Restaurant in New London. After selling the business, she continued to work there as the pastry chef and her special pies and tortes are still raved about to this day. She and Arthur did much traveling, enjoyed playing cards and getting together with family. In later years, she enjoyed crossword puzzles, word puzzles and reading. She was very proud of and spent a great amount of time in prayer over her children, grandchildren and great-grandchildren and attended their school events and activities whenever she could. She is survived by her children: Bev (John) Knudsen, New London; Jane (Stuart "Skip") Boese, New London; Roger (Linda) Kusserow, Appleton; Paul (Cindy) Kusserow, New London; grandchildren: Heather (Jon) Dahlke, and their children: Payton, Ava, Alaina and Amani; Brett (Kerry) Kusserow, and their children: Shane and special friend Eden, Blake, Kendra and Arthur; Shannon (Nick) Kraftzenk, and their children: Jared and Aidan; Chad (Michelle) Kusserow, and their children: Kylie, Collin and Sophie; Kara (Brian) Nowak, and their children: Everett, Callum and Dane; Sarah (Andy) Wait, and their children: Aislinn, Laila, and Lily; Amy (Darin) Stewart, and their children: Brianna and Ashley; Justin (Deanne) Kusserow, and their children: Ben and Kate; Matthew Boese and his fiancée Amanda Sheasby; and Kaden Kusserow; sister Ruby Schroeder, New London. She is further survived by nieces, nephews, other relatives and friends. Besides her parents and husband, she was preceded in death by her sisters and brothers-in-law, Arlene (Kenneth) Sweedy, Grace (Herman) Jennerjohn, Donald Schroeder, and her granddaughter Ann Marie Knudsen. The Christian Funeral for Lorene will be held on Tuesday, June 30, 2015 at 11:00 a.m. at Emanuel Ev. Lutheran Church with Rev. William Heiges officiating. Burial will be at Emanuel Lutheran Cemetery in the Town of Lebanon. A visitation will be held on Monday, June 29, 2015 from 4-7 p.m. at the Cline & Hanson Funeral Home in New London and on Tuesday at the church from 10:00 a.m. until the time of the service. Memorials are preferred for Emanuel Lutheran Church. The family wishes to thank the ICU medical staff, 8th floor medical staff and hospice staff at Appleton Medical Center and the staff at St. Joseph's Nursing Home in New London.

To order memorial trees or send flowers to the family in memory of Lorene Kusserow, please visit our flower store.