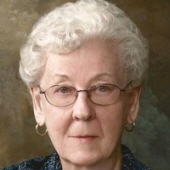 Lois Marie Zempel, age 91, of Weyauwega, went to her heavenly home on Wednesday, April 22, 2015. She was born on October 11, 1923, in Neenah, daughter of the late William and Clara Richter. On June 5, 1948, she was united in marriage to Lester R. Zempel at St. Peter Ev. Lutheran Church in Weyauwega, where she was still a member. He preceded her in death on October 28, 2010. After graduating from high school, she graduated from U.W. Oshkosh with a degree in education. She taught in various school districts, retiring after 27 years. Lois also farmed in the Town of Weyauwega with her husband Lester for many years, until they moved to the City of Weyauwega. She was a member of St. Peter Ev. Lutheran Church and their Ladies Aid. After they retired from the farm, she enjoyed traveling with Lester, also knitting and reading. She is survived by her son William (Caroline) Zempel, and their children Amber, Eric, Katrina (Dan) Herrera, Desiree' and Weston, all of Weyauwega; her late son Robert's children: Schamara (Sam) and Jan Marie, both of Merrill; 10 great-grandchildren; and a sister-in-law Luella Hoffmann, Nevada. She is further survived by her card buddies, special friend Priscilla Bartel, nieces, nephews, other relatives and friends. Besides her parents, husband and son, she was preceded in death by her great-grandson Robbie Nobel, and a brother William Richter. The Christian Funeral for Lois will be held on Wednesday, April 29, 2015, at 11:30 a.m. at St. Peter Ev. Lutheran Church in Weyauwega with Rev. Dennis Lemke and Rev. Newlin Schafer officiating. Burial will be in Oakwood Cemetery in Weyauwega. A visitation for Lois will be held from 4-7 p.m. on Tuesday, April 28, 2015 at the Cline-Hanson-Dahlke Funeral Home in Weyauwega and on Wednesday at the church from 10:30 a.m. until the time of the service.

To order memorial trees or send flowers to the family in memory of Lois M. Zempel, please visit our flower store.