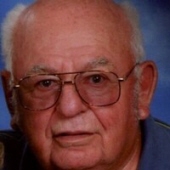 Lloyd “Boots” Riske, age 86, Manawa, passed away peacefully to eternal life at home on Saturday, December 12, 2020, surrounded by his family. He was born on September 12, 1934 in the Town of Union to the late Ernest and Elsie (Rindt) Riske. He served in the US Army from 1957-1959. He married Lois Peterson at Zion Lutheran Church in Manawa, Wisconsin on September 9, 1967. Boots owned and operated Riske Plumbing and Electric for most of his life. As Boots would tell you, he also had the largest pig farm in the Town of Union for many years. Boots enjoyed spending time with family and friends, family camping trips, hunting, fishing, playing softball, going to the casino, watching the Packers and the Brewers and playing cards. Boots especially enjoyed hunting mule deer and antelope out west with his son, father, father-in-law and many friends, which he did for many years. Boots entertained all with his quick wit and colorful true stories. He will be deeply missed by all who knew him. He was a lifelong member of St. Mark Lutheran Church in Symco.

The funeral service for Boots will be held on Wednesday, December 16, 2020 at 11:00 a.m. at St. Mark Lutheran Church in Symco with Rev. Jeffrey Smiles officiating. Burial will be in Union Cemetery in Symco. A visitation for Boots will be held on Tuesday, December 15, 2020 from 4-7 p.m. at the Cline-Hanson-Dahlke Life Celebration Center of Manawa and on Wednesday at the church from 10:00 a.m. until the time of the service.

We realize that because of Covid, some may not feel comfortable attending. The family understands and would prefer you do what is best for you.