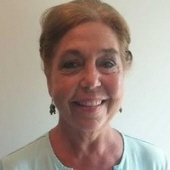 Linda Lee Bruesewitz received her angel wings with her beloved family and friends surrounding her on Monday, November 14, 2016 at ThedaCare Regional Medical Center in Neenah.

Linda was born December 15, 1954 to parents Wallace and Ardis (nee Schwartz) Kurth and attended Weyauwega High School. She married David Paul Bruesewitz and had three sons Joseph, Timothy, and David Jr. Linda owned and operated many businesses in Weyauwega. Nine years ago Linda moved to Austin, TX to be closer to her older sons where she began her walk with Jesus and became an ordained minister at Bridge of Angels Ministry. There, she worked with the homeless and underprivileged to get them on a path with Christ. In the past few years, Linda truly found her calling volunteering at a woman's shelter protecting and counseling battered women and children near Austin.

She leaves her sons, Joe and Tim Bruesewitz; daughters-in-law, Kate Ladubec and Stevie Bruesewitz as well as her grandchildren, Michael, Alexis and Sophia as her last immediate family members.

Please join them for a gathering at the Cline-Hanson-Dahlke Funeral Home in Weyauwega on Tuesday, November 15, 2016 from 4 to 7 pm to remember and celebrate Linda's life.

To order memorial trees or send flowers to the family in memory of Linda Lee Bruesewitz, please visit our flower store.