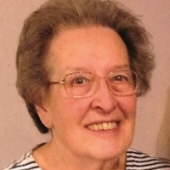 It was Lila’s wish to die in the same home in which she was born. She entered this world on January 9, 1936, born to Willie and Dora (Greening) Grosklaus. Lila was confirmed at St. Peter Lutheran in Weyauwega, WI. She graduated from Weyauwega High in 1954. On September 4, 1955, Lila married Daniel Buchholtz. They were blessed with six children. After her children were grown Lila worked in the deli at the local grocery store for many years until her retirement.

She was preceded in death by her parents, husband, and sons Douglas and Kenneth.