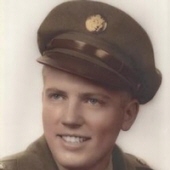 He learned carpentry from his father and began his building career with him in Milwaukee in 1948. He moved to Manawa, in 1960 and continued building homes in the Manawa and surrounding area until his retirement. He was a faithful member of St. Paul Lutheran Church where he served as treasurer for 25 years, custodian for 15, and served two terms as trustee.

He was preceded in death by his parents; older brother Marvin; father and mother in-law Robert J. and Rizpah Mirium (Norton) Heidenberger; sister and brother in-law Allan and Celeste Bostrom.

Funeral services for LeRoy will be held on Saturday, March 11, 2017, at 11:00 a.m. at St. Paul Lutheran Church, Manawa with Rev. Nathan Reichle officiating. Visitation will be held at the church on Saturday from 9:00 a.m. until the time of service. Burial will be in the Little Wolf Cemetery, Town of Little Wolf.

To order memorial trees or send flowers to the family in memory of LeRoy W. Juergens, please visit our flower store.