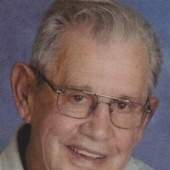 Leonard “Ole” Olsen, Jr., age 94, formerly of Manawa, went to his heavenly home on Monday, July 24, 2017 at Iola Living Assistance with loving family by his side. Len was born July 22, 1923, in Pulaski, Wisconsin, son of the late Leonard Olsen Sr. and Grace Schmoll. On August 29, 1947 he married Yvonne Raatz. After serving his country in the U.S. Navy from 1942-1946, he worked on the family farm and was a milk hauler. He also signed up and served his country in the Army from 1950-1951. Later he was a self-employed feeder pig dealer. In his retirement years he helped his son Larry with Classic Wood Works and was well known around the Waupaca County Courthouse as the “recycling guy” as he went floor-to-floor with his big cart picking up the recycling and chatting with the employees. Len was a devoted member of St. Mark Lutheran Church, Symco, where he served as an elder. He enjoyed spending time with his family, especially hunting and fishing! Jeremy took his grandpa out in the woods at Big Falls to spend quality time together in search of the big bucks right through his 93rd year. He also took him on the Old Glory Honor Flight this past spring. Len also loved to play UNO. He was a champion at it! Ole always predicted the scores of the Packer games and was usually pretty close. He also loved his special lap companions, Tuffy and Scooter.

The funeral service for Len will be held at 11:00 a.m. at St. Mark Lutheran Church in Symco on Thursday, July 27, 2017. Pastor Jeffrey Smiles will be officiating. Visitation will be held on Thursday from 9:30 a.m. until the time of the service at the church. Military services will be in the Union Cemetery, Symco.

Leonard’s family would like to extend a special thank you to the staff at the Iola Living Assistance for the care and compassion provided to him.

To order memorial trees or send flowers to the family in memory of Leonard 'Ole' Olsen Jr., please visit our flower store.