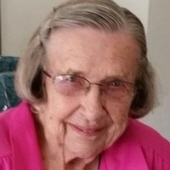 Leona F. Werth, age 94, Clintonville, formerly of Symco, passed away on Friday, August 07, 2015. Leona was born on April 21, 1921, in Manawa, daughter of the late Otto and Clara (Specht) Schmidt. She was united in marriage to Harold Werth on June 1, 1941, at St. Paul Lutheran Church, Manawa. He preceded her in death in 2009. Leona was a homemaker raising her children. She enjoyed baking, sewing and gardening. After Harold retired from farming, they enjoyed traveling south in their motor home, and later on she enjoyed playing cards at the Clintonville Senior Citizens Center and watching the birds. She is survived by her children: Darlene Malueg and her special friend Bryan, Neenah; Betty (Lynn) Jepson, Clintonville; Bruce (Mary) Werth, Houston, TX; daughters in-law, Diane Werth, Symco and Joyce Werth, Clintonville; brother in-law, Walter Janke, New London. Leona is further survived by 9 grandchildren, many great-grandchildren, other relatives and friends. She was preceded in death by her parents, husband, 2 sons, Larry and James, infant granddaughter, Cheryl, grandson, Lonnie, son-in-law Gary Malueg, 2 sisters and 3 brothers. Funeral services for Leona will be held on Monday, August 10, 2015, at 11:00 a.m. at St. Mark Lutheran Church, Symco, with Rev. Jeffrey Smiles officiating. Burial will be in the Union Cemetery, Town of Union. Visitation will be held at the church on Monday from 9:30 a.m. until the time of service. In lieu of flowers, memorials are preferred for the St. Mark Roof Fund.

To order memorial trees or send flowers to the family in memory of Leona F. Werth, please visit our flower store.