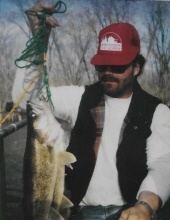 Lawrence “Larry” Schramm, age, 61, of Manawa, passed away on Friday, October 29, 2021 at his residence. He was born on January 16, 1960 in New London, son of the late Melvin and Lynette (Hogan) Schramm. Larry worked at Carew Concrete as a truck driver for the last several years. He enjoyed hunting, fishing and motorcycling. Larry liked helping others with their backhoe projects and construction projects.

He was preceded in death by his parents.

The family would like to thank friends of Larry for their care and concern especially Jim M., Jim E. and Pete and Mary.

Cards, memorials and donations, in honor of Larry, can be made out to his brother Daryl Schramm and sent to his address at E8332 Stage Road, New London, WI 54961.
To order memorial trees or send flowers to the family in memory of Lawrence Eugene Schramm, please visit our flower store.