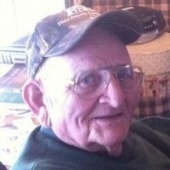 Lawrence "Bud" Kapitzke Lawrence "Bud" Kapitzke passed away on Sunday, October 11, 2015, at the Wisconsin Veteran's Home in King, at the age of 93. Bud was born March 23, 1922, near Weyauwega, son of the late Harry and Ella (Regal) Kapitzke, and he resided there most of his life. He was a life-long member of St. Peter Lutheran Church in Weyauwega. In WWII he served the Army Air Corps as a B-24 ball turret gunner in North Africa and Italy. He also served over 30 years with Wisconsin Electric, maintaining power to Weyauwega and surrounding communities. He was an avid outdoorsman who enjoyed hunting, fishing, and trapping. Bud was preceded in death by his wife, Julaine ("Judy"), his father, mother, and a brother, Russell, brother-in-law Edwin Thiel He is survived by his children, Jack and Merri (Keith) Kriewall, six grandchildren, and eight great-grandchildren. He is further survived by sisters: Verna Thiel, and Karen (Nathan) Peters, also a brother Glen (Shirley) Kapitzke, nieces, nephews, other relatives and friends A memorial service for Bud will be held on Friday, October 23, 2015, at 11:30 a.m. at St. Peter Lutheran Church in Weyauwega with Rev. Dennis Lemke and Rev. Newlin Schafer officiating. A gathering of family and friends will be held at the church on Friday from 10:30 a.m. until the time of the service. Burial will be in Oakwood Cemetery, Weyauwega. Undesignated memorial gifts will be given to the Disabled American Veterans organization.

To order memorial trees or send flowers to the family in memory of Lawrence 'Bud' Kapitzke, please visit our flower store.