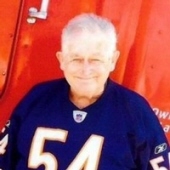 Lawrence “Larry” Schuelke Jr., age 73, formerly of Manawa, went to his Heavenly home on Tuesday, January 2, 2018, following a brief Illness. He was born on October 25, 1944, in Oak Park IL, son of the late Lawrence Sr. and Edna (Guill) Schuelke. Larry attended school in Franklin Park, IL and after school went on to serve his country in the US Navy. Following the service he worked for the Milwaukee Railroad for 10 years as a conductor and then owned and operated Dodge City Bar in Symco for 10 years. Larry drove for numerous trucking companies and then became his own boss owning and operating his own truck. He drove over 5 million miles until poor health caused Larry to retire. He enjoyed golf, casino trips, bingo, spending time with family and friends and his 3 dogs.

He was preceded in death by his parents, his brother Edwin Schuelke, brother-in-law, Jim Jorgenson and a nephew Michael Smith.

A Memorial service will be held for Larry on Saturday, January 6, 2018, at 11:00 a.m. at St. Mark Lutheran Church, Symco, Rev. Jeffrey Smiles will officiate. Burial will be in the Little Creek Cemetery, Town of Little Wolf. Visitation will be held at the church on Saturday from 9:00 a.m. until the time of service.

To order memorial trees or send flowers to the family in memory of Lawrence A. Schuelke Jr., please visit our flower store.