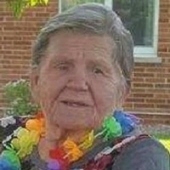 Laura Marlene Smith, age 82, of Bear Creek, went to her Heavenly home on Thursday, March 30, 2017 at Greentree Nursing Home in Clintonville. She was born on April 3, 1934 at Jennings, daughter of the late William and Lena ( Rudolph) Meister. On July 10, 1960, she was united in marriage to Clifford Smith. He preceded her in death. Laura was a homemaker most of her life. She enjoyed spending time with her grandchildren and great-grandchildren they all called her Granny. She also, enjoyed making quilts, gardening and helping with the farm chores before she was unable to help.

A special thanks to her grandson Joshua Fields for all his care and help over the last year. Also, his son Beau and Laura's great-granddaughter Arianna for brightening her day when she saw them.

To order memorial trees or send flowers to the family in memory of Laura Marlene Smith, please visit our flower store.