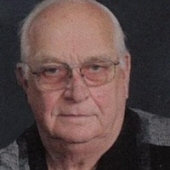 Kurt David Pamperin Sr., age 79, of Town of Royalton, passed away on Thursday, December 28, 2017 at ThedaCare Regional Medical Center in Appleton after a lengthy illness. Kurt was born on January 28, 1938 to the late John and Frieda (Kurth) Pamperin in Washington County. Kurt was united in marriage to Karyn Geddes on June 4, 1961 in Richland Center WI. Kurt graduated from Kewauskum High School in 1956. He worked at R & L Electric in New London until his retirement. Kurt served in the US Army Reserves for 8 years. He enjoyed raising beef cattle. Kurt was a member of Emanuel Lutheran Church in New London.

Kurt was preceded in death by his parents; brothers, John, Walter and Raymond Pamperin and sister, Marie Schaeffer.

The funeral service for Kurt will be held at 11:00 a.m. Wednesday, January 3, 2018 at Emanuel Lutheran Church in New London. Rev. William Heiges will be officiating. Visitation will take place from 9:00 a.m. until the time of the service directly at the church on Wednesday. Burial will be in Baldwins Mill Cemetery, Town of Royalton.

To order memorial trees or send flowers to the family in memory of Kurt D. Pamperin Sr., please visit our flower store.