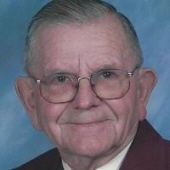 Kenneth Rohde, age 95, went to his heavenly home on Sunday, November 8, 2020 in New London, Wisconsin. Ken was born in the town of Little Wolf, Waupaca County, to the late Carl and Minnie (Osterloth) Rohde. He graduated from Little Wolf (Manawa) High School with the class of 1943. Ken worked in southern Wisconsin for a few years and then came back to Manawa to live and work. On October 25, 1948 he was united in marriage to Nelda Jannusch. They farmed several years in the Town of Bear Creek before moving to Manawa. Ken was employed at the Piotter’s store in Manawa and then worked for the Simmons Company in New London. Ken was an avid follower of Wisconsin’s sports teams, the Packers, Brewers and Bucks.

The family would like to thank the staff at Monarch Meadows for the wonderful and compassionate care given to dad during his stay and also to Heartland Hospice for their care and support.

To order memorial trees or send flowers to the family in memory of Kenneth Rohde, please visit our flower store.