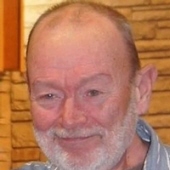 ﻿Kenneth H. Klotzbuecher “Krout” age 71, of Manawa, passed away on Thursday, December 28, 2017 at his residence. He was born on September 26, 1946, son of Howard and Evelyn (Fuhs) Klotzbuecher. Krout graduated from Manawa High School in 1964 and then enlisted and served in the US Navy from 1964-1968. He worked as a welder at Titan Industries, until he retired in 2011.

Krout was preceded in death by his father, Howard and grandson Brady Bailey.

The memorial service for Krout will be held on Wednesday, January 3, 2018 at 11:30 a.m. at St. Paul Lutheran Church in Manawa with Rev. Nathan Reichle officiating. A gathering of family and friends will take place from 9:30- 11:30 a.m. directly at the church on Wednesday.

To order memorial trees or send flowers to the family in memory of Kenneth H. Klotzbuecher, please visit our flower store.