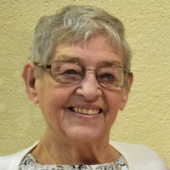 On April 18, 1953 Joyce was united in marriage to Arlyn (Sonny) Bauer in West Bloomfield, Christ Lutheran Church. Together Sonny & Joyce were farmers in the West Bloomfield area while raising seven children. Joyce also worked at Presto Products for several years. After she retired, Sonny & Joyce traveled in their motorhome, including their annual winter trips to Arizona. After settling down, Sonny & Joyce resided in New London for their remaining time together.

She was preceded in death by her parents and grandson, Cody Loehrke.