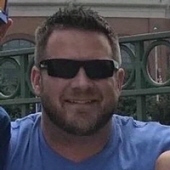 Joshua Reed Hass, 42, passed away peacefully in his home on April 4, 2019. He fought a courageous battle with pancreatic cancer and was surrounded by his family and friends at the time of his passing.

Born in New London, Wisconsin on March 4, 1977, he was the eldest son of James and Janice (Rivers) Hass. Josh was a 1995 graduate of Little Wolf High School in Manawa, WI. After high school, Josh went on to become a Badger at the University of Wisconsin - Madison, graduating with a BA in Communications and Psychology in 2000. Josh was also a member of the Sigma Phi Epsilon fraternity. On January 13, 2011 and August 15, 2012, respectively, Josh welcomed his two sons, who were the most important part of his life.

Josh lived and worked in Chicago prior to joining the United States Army in May 2004. From 2004-2012, Josh served on active duty, spending much of his time in the distinguished US Army 75th Ranger Regiment, 3rd Battalion where he participated in multiple combat tours. He continued to serve as a member of the Wisconsin Army National Guard until the time of his death. Josh was contracted at Oshkosh Defense as an Information Technology Security Specialist.

Josh had many hobbies and interests throughout his life. He was an avid snowboarder and loved shredding the gnar whenever and wherever he could find fresh pow. He was a GORUCK Cadre and had many groupies, affectionately known as GRTs. He created a special GORUCK annual event benefiting the Snowdrop Foundation.

Josh loved trolling, gaming, nerding out, and hunting. In the fall, you could always find him “hunting” at The Shack, Home of the Worthless Hunters. Josh was a Star Wars buff and passed on that love to his boys. He also loved spending time at the Shire with his family. A true WI kid, he loved cheese curds, brats and Spotted Cow. Josh was a member of KMSMC Midwest Marauders and he enjoyed riding his Harley Davidson with the club.

Josh is preceded in death by grandfather, Louis Hass and cousin, Justin Meidam.

Josh will be remembered for his selflessness, kindness, strength, tenacity, humor, sarcasm, and wit. He was a mixture of badass and teddy bear, and you were lucky if you got both. He had a heart for those who needed a friend.

The visitation will be held on Friday, April 12, 2019 from 4 pm to 8 pm at Cline & Hanson in New London, WI. Additional visitation will be held at St. Paul Lutheran Church in Manawa, WI on April 13, 2019 from 9 am to 11 am with memorial service to immediately follow. Full military honors will be performed at Manawa Area Veterans Freedom Park after the service. Fellowship and luncheon to immediately follow at Cedar Springs Golf Course.

In lieu of flowers, a memorial fund has been set up in Josh’s name.