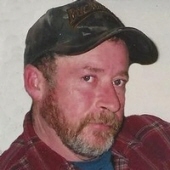 John A. Ferg, 59, Ogdensburg, went to his heavenly home on Wednesday, February 14, 2018. John was born in Waupaca on March 10, 1958, son of the late Wesley P. and Eunice I. (Kostrzak) Ferg of Manawa. He was a 1977 graduate of Little Wolf High School and dedicated 35 years of employment to Hillshire Farm in New London. John enjoyed being outdoors any chance he was given, raising animals of all sorts, hunting, fishing, trapping and gardening. His greatest pleasure was the sound of a baying hound dog in the distance and the company of his family and grandchildren. John is survived by his son, Jacob J.(Ashleigh) Ferg, Ogdensburg; siblings: James W. (Cindy)Ferg, Iola; Nancy A. Ferg and special friend Ken, Hortonville; Jay S. (Vickie) Ferg, Ogdensburg; Wendy S. (Paul) Nichols, New London; and the absolute joys of his life were his four grandchildren: Isabella, Alexis, Azaleah, and Wesley. He is further survived by aunts, uncles, many nieces, nephews, cousins, other relatives and friends. He was preceded in death by his parents and a sister Connie L. (Ferg) Seeger.

The funeral service for John will be held on Monday, February 19, 2018 at 11:30 a.m. at St. Paul Lutheran Church in Manawa with Rev. Nathan Reichle officiating. A visitation for John will be held on Sunday, February 18, 2018 from 1-4 p.m. at the Cline-Hanson-Dahlke Funeral Home in Manawa, and also on Monday at the church from 10:00 a.m. until the time of the service. In lieu of flowers, a memorial fund has been established.

To order memorial trees or send flowers to the family in memory of John A. Ferg, please visit our flower store.