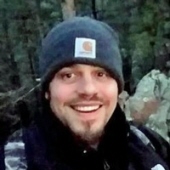 Joel Michael Beyer, age 38, of Manawa, died unexpectedly of natural causes on Wednesday, March 7, 2018. He was born on May 31, 1979 in New London, son of Jerry and Judy (Kriese) Beyer. On May 2, 2009, Joel married Laura Ramacitti in Appleton. He went to school in the Little Wolf School District. He then received an Associate’s Degree in Marketing from Fox Valley Tech. Following the Tech, he went to Lakeland College and received his Bachelor’s Degree. He was employed in Appleton for a number of years but recently was employed at the Waupaca Foundry. Joel enjoyed hiking, hunting and fishing. He especially enjoyed spending time with his family. He was a member of St. Paul Lutheran Church in Manawa.

To order memorial trees or send flowers to the family in memory of Joel M. Beyer, please visit our flower store.