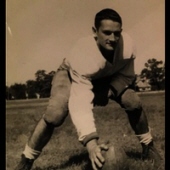 Jerry Ward Owen, age 81, of Weyauwega, went to his heavenly home on Monday, April 11, 2016. He was born on March 1, 1935 in Battle Creek MI, son of the late
Ward and Delilah Owen. He graduated from Weyauwega High School in 1952,
and then joined the Coast Guard where he served his country for 3 years. Jerry worked construction with his father and in his later years continued carpentry and painting professionally. Jerry cherished his horse named Trixy and his beautiful black 1964 Cadillac convertible.

Jerry was married to Nancy Owen on February 22, 1956, and they had five boys: Bruce, Robert, Bryan, Scott and Mike. He was also married to Chrystal Higginbotham and they had four children: Matthew, James, Bonnie and Mark.

Jerry loved spending time making his secret barbecue sauce for making barbecue chicken as well as brewing a big pot of chili. He would take his kids out camping in the sand pit and would have fun nights and good talks by the fire. He taught his children to catch fire flies in a jar for tent lights, and to heat the rocks by the fire and put them at the bottom of your sleeping bag for warmth.

He was preceded in death by his parents, Ward and Delilah Owen, his uncle Sam Thompson, aunt Corliss Larson and aunt Beulah Thompson.

To order memorial trees or send flowers to the family in memory of Jerry Ward Owen, please visit our flower store.