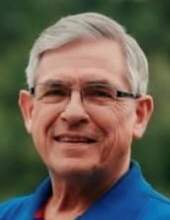 Jerry Alan Suehs, of Manawa, was called Home on May 4th, 2022 at the age of 64. He was born on January 29, 1958 to Carl and Loyola (Patri) Suehs of Manawa. He was baptized and confirmed at St. Paul Lutheran Church in Manawa where he also attended primary school.

Jerry graduated Little Wolf High School in 1976 and started working at Pierce Manufacturing shortly there after. On June 18, 1977 he married his high school sweetheart Jane Thompson at Zion Lutheran Church in Manawa. He served his Lord by teaching Sunday School, Catechism, and sitting on the church council. In 1993, Jane and Jerry opened an automotive business " Suehs Motors" where he worked with his wife for the next 29 years. He enjoyed spending time with his family, hunting at the lodge, ice fishing, and playing with his "grandbabies".

He is sorely missed by his wife Jane; son Andy (Brenda) Suehs, Manawa; son Ryan (Molly) Suehs, Waupaca; and daughter Emily (Kris) Brown of Reedsville. His "grandbabies" held a special place in his heart. He dearly loved Hunter and Carl Suehs, Parker, Coralie, and Jordy Suehs, and Noah and Micah Brown. He is also survived by his siblings: Jeff Suehs, Diane Thompson, and John and Teri Rae Suehs; his in-laws: Kris and Butch Wagener, Peggy and Don Dallman, Jenny and Brian Bessette, and Peter and Kris Thompson, all of Manawa. He leaves behind many special nieces, nephews, and many, many friends.

Our hearts are broken, but the memories you gave us will last until we meet again.
To order memorial trees or send flowers to the family in memory of Jerry A. Suehs, please visit our flower store.