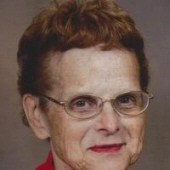 Jayne Elaine Beck, age 84, passed away peacefully on Wednesday, October 7, 2020 at the Manawa Community Nursing Center where she had resided since the fall of 2019.

Jayne was born to Mabel and Harry Mathias in the Town of Little Wolf on March 10, 1936. From a young age, Jayne had a love for music. She played the Flute and enjoyed singing at school and at home. Jayne began her education at the age of 5 when she started the 1st Grade along with her sister, Joyce. She attended the public school until the 6th grade, when she transferred to St. Paul Lutheran School in Manawa. It was here that she received the foundation of her Christian faith and where she was confirmed in the 8th grade. Jayne attended Little Wolf High School and graduated in 1953.

After graduating Jayne moved to Detroit Michigan and worked for General Mills. After a year she returned home to Wisconsin and worked for the Manawa School District as a secretary. She later moved to Appleton where she worked at Aid Association for Lutherans until she married.

On June 27th, 1959 she married Robert C Beck of Manawa. Robert and Jayne settled in Manawa and raised their 4 children and were married for 55 years until Robert passed away. During their life together Jayne continued to work as a Dietary Aide at the Manawa Community Nursing Home for many years until her retirement. She enjoyed working with the elderly patients every day.

Jayne was a long time member of St Paul Lutheran Church and was a member of the Church Choir for many many years. She was also a member of the Community Chorus and participated in the Christmas Cantata program for several years.

The funeral for Jayne will be held on Saturday, October 10, 2020 at 11:00 a.m. at St. Paul Lutheran Church in Manawa with Rev. Nathan Reichle officiating. Burial will be in Little Wolf Cemetery, Town of Little Wolf. A visitation for Jayne will be held on Friday (TODAY) from 4:00 – 6:00 p.m. at the Cline-Hanson-Dahlke Funeral Home in Manawa and on Saturday at the church from 9:30 a.m. until the time of the service.

Jayne’s funeral service will be recorded and a link will be put on our website following the service.