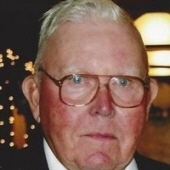 In the past week there were a lot of precious memories and goodbyes said to Jim Gorman as he died peacefully at home. At 90 years old, Jim was born October 28, 1924, at home in the Township of Lebanon, to Bernard and Mary (O'Donnell). Jim was baptized, took first communion, and was confirmed at Sacred Heart Catholic Church in Manawa. Jim completed 8 years of grade school at Maple Hill School-Township of Lebanon. After one year in high school, he was called to help his father to work on the family farm. In 1950, he met Mary Ann Gough on July 4 at a dance at Pleasant View. On October 8, 1952, they were united in marriage at Most Precious Blood Catholic Church in New London. They shared 63 years together, working side by side. Jim owned and farmed his entire life on Highway N out of Manawa. Farming was his life. They were faithful members of St. Patrick's Catholic Church in the Township of Lebanon. He enjoyed retirement with his wife and children, grandchildren and great-grandchildren, and all his neighbors where everyone helped each other out when needed. Jim is survived by his wife Mary Ann; children: Robert (Barb) Gorman, William (Sandy) Gorman, Kathleen (Jack) Korb, Ellen (Mike) Bodoh, Patrick (Kim) Gorman; 12 grandchildren and 13 great-grandchildren; sisters: Mary Ellen McClone, Rosie (George) Payne. He is further survived by many cousins, nieces, nephews, other relatives and friends. He was preceded in death by his parents, sister Eleanor (John) O'Keefe; brothers John Gorman, David (Eileen) Gorman, Garrett (Edna) Gorman; in laws George and Mary (Lorge) Gough; sister-in-law Helen (Charlie) Oashgar; brother-in-law Pat McClone, and a grandson Nicholas Chambers The Funeral Mass for Jim will be held on Wednesday, July 22, 2015 at 11:00a.m. at St. Patrick's Catholic Church in the Town of Lebanon with Fr. Msgr. Dennis Lally officiating. Burial will be in the parish cemetery. A visitation for Jim will be held on Tuesday at the Cline-Hanson-Dahlke Funeral Home in Manawa from 4-7 p.m. and on Wednesday at the church from 9:30 a.m. until the time of the service.

To order memorial trees or send flowers to the family in memory of James Gorman, please visit our flower store.