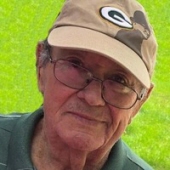 James F. Tews, 79, of Apache Junction, AZ, formerly of Weyauwega, Wisconsin passed away on September 2nd, 2019 after a lingering illness. He was born on May 9th, 1940 in Fremont, Wisconsin to the late Paul Sr. and Eleanor (Wideman) Tews. He attended Beaver Dam School and later Weyauwega High School. He worked at Wolf River Sausage and later drove semi for Schneider Transport of Green Bay, Wisconsin. He was a member of their Million Mile Club. When health reasons forced him to retire, he became a volunteer driver for Waupaca County, he enjoyed driving the elderly to their appointments, especially the veterans. He was the most loving and caring husband, father, grandfather and great-grandfather, very proud of his family and all their accomplishments. On Dec. 27th, 1958 he married the love of his life and they shared 60 years of marriage together. Along with family and friends, they celebrated with an early party in Apache Junction, AZ. on November 8th, 2018.

A Memorial Mass for James will be held on Thursday, September 19, 2019 at 11:00 a.m. at Ss. Peter & Paul Catholic Church in Weyauwega. A gathering of family and friends will be held at the church on Thursday from 9:00 a.m. until the time of the mass. Burial will be in Oakwood Cemetery, Weyauwega.