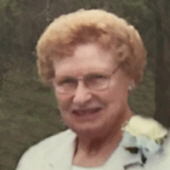 Irene (Suehs) Sarna, age 98, passed away peacefully on Thursday, February 27, 2020, at Manawa Community Living Center in Manawa, WI. She was born March 14, 1921, in the town of Lebanon, Waupaca County to Gustav and Anna Suehs. She was a 1938 graduate of Watertown High School in Watertown, WI. Shortly thereafter she sought employment at Republic Tool and Machine in Chicago, IL and lived with her Aunt on the near north side. It was at Republic where Irene would be introduced to her husband Edward A. Sarna (deceased). As Irene would relate, “it was not love at first sight” but after Ed returned home from serious wounds during WW II, Irene fell in love and they were married in 1948 and would stay that way for over 50 years until Ed’s death in 2003. Danny came along in 1950 and David in 1954, in what was the Sarna neighborhood on Oakley Street, Chicago. After a period of time the family moved to Evergreen Park, IL, where the boys graduated from High School and pursued their individual careers. Eventually purchasing Sarna’s Service Center in Manawa, WI and building a log home on the Little Wolf, Irene returned home and the shop operated until 1989, at which time the Schierl Company purchased the business and Ed and Irene retired. During that period, they were able to go on several trips to various locations. Irene was involved in church choirs both in Manawa and Symco, Sarah’s Circle, DAV Auxiliary, Meals on Wheels, etc. After Ed’s passing Irene stayed on the home place enjoying simple pleasures; chatting with friends and family, snacking, and spending time with her grandchildren. Irene also had a proud respect of our nation and the military, of which many of her family members served.

Private family services were held for Irene at the Cline-Hanson-Dahlke Funeral Home in Manawa.

The family would gratefully like to thank the Manawa Community Nursing Center for their tremendous care, concern and thoughtfulness during this difficult period.

To order memorial trees or send flowers to the family in memory of Irene A. Sarna, please visit our flower store.