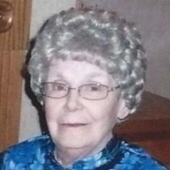 Ingeburg M. Domke, age 98, Wisconsin Rapids, formerly of Manawa, passed away on, Thursday, August 13, 2015, at Renaissance Assisted Living, Wisconsin Rapids. She was born on December 16, 1916, in Clinton, Iowa, daughter of the late Otto and Margaret (Sothmann) Gamb. On June 11, 1941, she was united in marriage to Rev. Leonard Domke in Sheboygan Falls. She was a dedicated wife and mother as well as an avid homemaker who loved to cook and bake. Ingeburg is survived by her daughters, CarolAnn Lippert, Wisconsin Rapids; Luella (Bud) Parker, Tigerton and DonnaMae (Oliver) Burrows, Weston and a son Kenneth (Remy) Domke, Vallejo, California. She is further survived by 13 grandchildren, 17 great-grandchildren, and numerous other relatives. She was preceded in death by her husband Rev. Leonard Domke, parents and 3 brothers, Werner, Ulrich and Helmuth. Funeral services for Ingeburg will be held on Monday, August 17, 2015, at 11:00 a.m. at Cline-Hanson-Dahlke Funeral Home, Manawa with Pastor Tom Theama officiating. Burial will be held in the Roseland Cemetery, Marion. Visitation will be held at the funeral home on Monday 10:00 a.m. until the time of service.

To order memorial trees or send flowers to the family in memory of Ingeburg Domke, please visit our flower store.