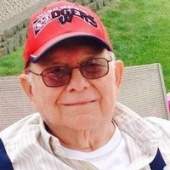 Herman Jr. Krueger, age 84 of Manawa, passed away Saturday, March 19, 2016. He was born November 21, 1931 in the Township of Union to Herman Sr. and Amy (Lashua) Krueger. Herman graduated from Little Wolf High School. He then worked for Herman (Gladys) Roland on their farm until he was drafted into the U.S. Army and served one year in Korea. He worked for 34 years at Hillshire Farm in New London. In 1961, he married Beverly Holtz. Together they celebrated 54 years of marriage and had four children. Herman enjoyed family and friends, especially his grandchildren. He loved to hunt and fish. He was a devoted Packer and Badger fan.

He was preceded in death by his parents, and siblings: Averill Roenz, Carl, Iris Draeger, Edwin, Robert, Frederick (Spud), and David.

The funeral service for Herman will be held on Tuesday, March 22, 2016, at 7:00 p.m. at the Cline-Hanson-Dahlke Funeral Home in Manawa with Rev. Greg Watling officiating. Burial will be in Little Wolf Cemetery, Town of Little Wolf. A visitation will take place at the funeral home on Tuesday from 3 p.m. until the time of the service.

To order memorial trees or send flowers to the family in memory of Herman Krueger Jr., please visit our flower store.