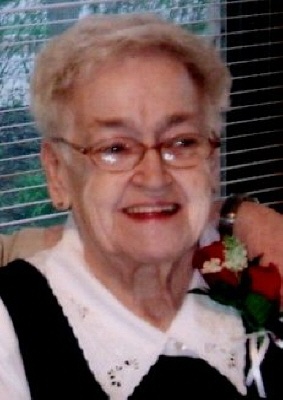 Harriet Pelton Main, age 92, passed away peacefully of natural causes on Wednesday, December 15, 2021 at the Wisconsin Veteran’s Home in King. She was born on April 16, 1929 in Waupaca, daughter of the late John and Marjorie (Stewart) Pelton. She graduated from Waupaca High School in 1947. Harriet married after high school and had four children, all boys. She worked most of her early life as a waitress at two jobs to support her boys. Harriet met the love of her life and married Arlan “Red” Main on April 22, 1967. She was a life long member of St. Mark Episcopal Church in Waupaca. Harriet was proud of her boys and her grandchildren and great-grandchildren. While she was at King, she enjoyed playing bingo, and if you asked, she would tell you she was the big winner. For many years Harriet worked as a receptionist at Ainsworth Hall at King and greeted everyone who entered with a friendly smile. For more than 20 years, Harriet found great joy entertaining as Mrs. Claus with Red as her Santa, sharing the Christmas spirit with family and friends near and far.

Besides her parents and husband, she was preceded in death by her siblings and their spouses: Dr. Russell (Dorothy) Pelton, Juliet (Clinton) McCoog, Josephine Langhoff, Marjorie Reichl; sister-in-law Cleora Main.

The funeral service for Harriet will be held on Wednesday, December 29, 2021 at 11:00 a.m. at St. Mark Episcopal Church in Waupaca (415 S. Main St.) with Mother Julia Hendrix officiating. Burial will be in Lakeside Cemetery, Waupaca at a future date. A visitation for Harriet will be held at the church on Wednesday from 10:00 a.m. until the time of the service. In lieu of flowers, memorials may be made to St. Mark Episcopal Church.

The family would like to thank Heartland Hospice for their care of Harriet late in her life, the staff at Wisconsin Veteran’s Home in King where she spent a good portion of her life, and Chaplain Rich Engle.
To order memorial trees or send flowers to the family in memory of Harriet Main, please visit our flower store.