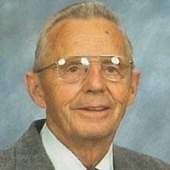 Age 88, of Weyauwega, went to his heavenly home on Monday, February 1, 2016 at his residence. He was born on December 14, 1927 in Weyauwega, son of the late Elmer and Laura (Knoble) Dobbert. Hans owned and operated the Dobbert Resort in Weyauwega for over 60 years. He loved fishing, but he especially loved taking care of the resort and the guests. He was a member of St. Peter Ev. Lutheran Church in Weyauwega.

To order memorial trees or send flowers to the family in memory of Harley 'Hans' Dobbert, please visit our flower store.