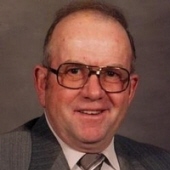 Glenn H. Tellock, age 85, passed away on Tuesday, May 5, 2015 at Stevens Point Care Center. Glenn was born September 6, 1929, in the town of Union to Raymond and Lisada (Rand) Tellock. He attended Marble Grade School, was confirmed at First Methodist Church in Clintonville, and graduated from Clintonville High School. As well as helping his dad on his farm during his school years, he worked for neighboring farmers and also at a pea vinery. After graduating from high school he worked for Greadly Foundry in Milwaukee. He also took several short courses in agriculture and welding. Glenn married Inez Handrich at St. Paul Lutheran Church in Manawa on August 1, 1948. They rented a farm for nine years, then purchased a farm, later adding two more farms. In 1966 they received the Most Progressive Farmer of the Year Award for Waupaca County. Glenn and Inez farmed until retiring in 1994 and moved to Clintonville. They have resided at Riverview Lodge, Stevens Point, since September, 2014. After retirement from the farm, Glenn worked for Tomorrow Valley Co-op delivering fertilizer, seed, etc. He also worked for Jim Borlen, doing custom combining and other field work, and also delivering trucks for Marion Body Works. Glenn is a member of St. Marks Lutheran Church of Symco where in his earlier years he served as secretary and on various committees. He was a member of the School Board of Marble School, served on the boards of the Farm Home Administration and the Tomorrow Valley Co-op, and was a delegate for Twenty First Century Breeding Association. Glenn enjoyed farming, motorcycling, reading, playing cards, and traveling. He loved his family and friends. He will be dearly missed by all of us. Glenn is survived by his loving wife Inez; his daughters Bonnie (Don) Rufledt of Stevens Point, Wyonne (Bob) Buntrock of rural Bear Creek; grandchildren Wendy Rufledt (Andy Wang) of St. Paul, Jason Rufledt of St. Paul, Robyn Buntrock of rural Manawa; great-grandchildren Rowin, Lumen, Caspian; brothers Leland (Wanda) Tellock of Embarrass, Gerald (Sue) Tellock of Clintonville, Raymond (Jeane) Tellock of rural Bear Creek; sisters Lorene Nienke of Stevens Point, Ramona (Larry) Danke of rural Clintonville; sisters-in-law Erna Tellock of Clintonville, Elda Tellock of Greenfield; brothers-in-law Bill Drifka of rural Stevens Point, Melvin Handrich of rural Weyauwega; many nieces and nephews. Glenn was preceded in death by his parents Raymond and Lisada; brothers Roger Tellock, Earl Tellock, and Milton Tellock; sisters Carol Hoffman, LaVonne Drifka, Marorie Gritzmacher, Ruth Barbatos, Jeanette Tellock; brother-in-law Robert Handrich. The funeral service for Glenn will be held on Friday, May 8, 2015 at 11:00 a.m. at St. Mark Lutheran Church in Symco with Rev. Jeffrey Smiles officiating. Burial will be in Graceland Cemetery in Clintonville. A visitation for Glenn will be held directly at the church on Friday from 9:30 a.m. until the time of the service. A special thanks to all of the caregivers at Riverview Lodge, St. Michael's Hospital, Stevens Point Care Center, and Ministry Hospice Care.

To order memorial trees or send flowers to the family in memory of Glenn H. Tellock, please visit our flower store.