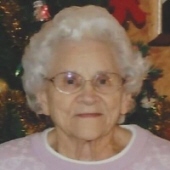 Gladys Lily Lorenz, age 99, of Weyauwega, went to her heavenly home on Saturday, June 8, 2019 at Crossroads Care Center in Weyauwega. She was born on June 14, 1919, in Bear Creek, daughter of the late Arthur and Anna (Jorgensen) Meidam. Gladys graduated from Bear Creek High School in 1937. On December 18, 1943, she was united in marriage to Paul Lorenz in Houlton, Oregon. He preceded her in death in 1999. While she lived in Oregon, she worked for the Railroad Co. She then became a welder at Williamette Shipyards and worked on submarines and minesweepers during World War II. After her marriage to Paul, they moved to North Dakota. In 1947, they moved back to Wisconsin. She worked with her husband in the family business, Paul's Processing Plant. She then worked for Taylor Cheese in Weyauwega until her retirement. Gladys loved baking and gardening, but she especially loved spending time with her family. She was a member of Royalton Christian Church and their ladies aid.

Besides her parents and husband, she was preceded in death by her daughter Marlene Pingel; 2 sisters: Lucille (Harold) Hansen and Beatrice (Pete) Starchaska; a brother: Arthur Meidam and a niece Janice Starchaska.

The Christian Funeral for Gladys will be celebrated on what would be her 100th birthday on Friday, June 14, 2019 at 11:00 a.m. at the Royalton Christian Church with Rev. Tom Theama officiating. Burial will be in Royalton Cemetery. A visitation for Gladys will be held at the church on Friday from 9:00 a.m. until the time of the service.

A special thank you to the staff at Crossroads in Weyauwega for their wonderful care and concern of Gladys.