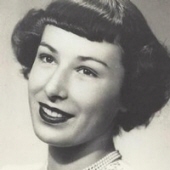 Gertrude A. Pope, age 88, of Manawa, went to her new life with God and to be with her husband and son on Thursday, January 12, 2017 in New London. She was born on January 4, 1929 in Galloway, daughter of the late Louis and Emma (Miller) Schneiderwent. Gertrude was united in marriage to John Pope of Lind Center, Waupaca County, on October 13, 1951 at St. Paul Lutheran Church in Manawa. She lived in Lind Center for 15 years and then moved to Manawa. She was employed by Zwicker Knitting Mills from 1949 until they closed in 1991. She liked the outdoors and traveled many places with John including Hawaii and England. She also enjoyed going to Auctions.

She is survived by a sister Alice Yohr; sister-in-law: Marjorie Schneiderwent; also many nieces, nephews, other relatives and friends.

Besides her parents and husband, she was preceded in death by a son Dennis; siblings: Melvin and Arnold Schneiderwent, Dorothy Rouer and Loretta Postel; brother-in-law Arlyn Yohr and sister-in-law Lucille Schneiderwent.

A memorial service for Gertrude will be held on Wednesday, January 18, 2017, at 2:00 p.m. at the Cline-Hanson-Dahlke Funeral Home in Manawa with Rev. Judy Pinnow officiating. Burial of her cremains will be next to her husband at Lind Center Cemetery in the Town of Lind in the spring. A gathering of family and friends will take place at the funeral home on Wednesday from 1:00 p.m. until the time of the service.

To order memorial trees or send flowers to the family in memory of Gertrude A. Pope, please visit our flower store.