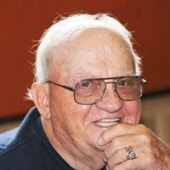 Gerald was born January 14, 1928 in Kaukauna, WI to Isaac and Margaret (nee Derks) Solberg. He served in the Navy during WWII in the Pacific Theater, on the USS Lyman K. Swenson, and the Merchant Marine. He played on the Flying Dutchmen semi-pro football team.

Gerald married the love of his life, Gloria Felski of West Allis, on Sept. 4,1954. They built a life together in West Allis, raising a family of four children, and became founding members of West Allis Special Olympics in 1969. They were active and devoted members until moving to Weyauwega in 1994. Gerald was a retiree of the W.A. Water Dept.

Gerald walked his faith through service and advocacy, as a member of the American Legion, VFW, Amvets, W.A. Crime Stoppers and Neighborhood Watch, Knights of Columbus, political campaigns, and serving as a union steward. He was Cub Master of pack 586 in West Allis. Family, fishing, and country music brought him joy. His smile will remain in the hearts of all who knew him. We love you, Dad!

Heartfelt thanks to all the staff of St. Camillus Memory, Skilled, and Hospice care for your compassionate care as you journeyed with us.

To order memorial trees or send flowers to the family in memory of Gerald Solberg, please visit our flower store.