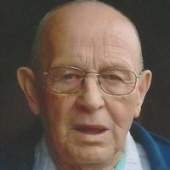 Gerald LeRoy Buckholt, age 81, of Weyauwega, passed away on Monday, September 26, 2016 at Lakeview Manor in Weyauwega surrounded by his loving family. He was born on May 18, 1935, in the Town of Belmont, Portage County, son of the late Floyd and Nellie (Low) Buckholt. On November 13, 1954, he was united in marriage to Lyla Harris. He was a farmer and hauled milk for 32 years.

He was preceded in death by his parents; brothers: David, Bruce; sisters: Elaine, Audrey, Nancy and Debbie.

A memorial service for Gerald will be held at 11:00 a.m. on Monday, October 3, 2016 at the Cline-Hanson-Dahlke Funeral Home in Weyauwega with Rev. Pam Ritchie officiating. Burial will be in Baldwin's Mill Cemetery in the Town of Royalton. A gathering of family and friends will be held at the funeral home on Monday from 9:00 a.m. until the time of the service.

To order memorial trees or send flowers to the family in memory of Gerald L. Buckholt, please visit our flower store.