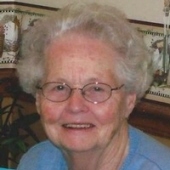 Georgia Ann Bestul, age 85, of Iola, formerly of the Manawa area, went to her heavenly home on Wednesday, April 6, 2016, at her residence in the Iola Senior Village. She was born on July 15, 1930 in Madison, daughter of the late George and Lillian (Rudd) Walrath. On October 28, 1952 she was united in marriage to Phillip Bestul, he preceded her in death in 1989. One of Georgia’s great loves was to take care of people. She did that by her career in nursing. She earned her nursing degree later in life and started working at the Iola Hospital, then at the Iola Nursing Home spanning over 30 years. She retired at the age of 83 in 2014. Her greatest love was her family as a mother, grandmother, and great-grandmother. She was a member of St. Mark Lutheran Church in Symco.

Besides her parents and husband, she was preceded in death by a son David Roy Bestul, sister Barbara (Leonard) Behnke, also brothers-in-law and sisters-in-law.

The funeral service for Georgia will be held on Monday, April 11, 2016 at 11:00 a.m. at St. Mark Lutheran Church in Symco with Rev. Jeffrey Smiles officiating. Burial will be in Union Cemetery in Symco. A visitation for Georgia will be held on Sunday from 1-3p.m. at the Cline-Hanson-Dahlke Funeral Home in Manawa, and on Monday at the church from 10:00a.m. until the time of the service.

To order memorial trees or send flowers to the family in memory of Georgia A. Bestul, please visit our flower store.