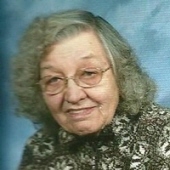 Age 94, of Weyauwega, went to her heavenly home on Saturday, September 12, 2015, at Crossroads Care Center in Weyauwega. She was born on April 18, 1921 in Clintonville, daughter of the late Gilbert and Clara (Schmidt) Gabrielson. Geneva was baptized on July 10, 1921. On November 13, 1942, she was united in marriage to Leonard Woodard. He preceded her in death in 1991. Geneva and Leonard joined First Lutheran Church in Poy Sippi on January 31, 1965, where she remained an active member. Geneva enjoyed gardening and loved her dogs and cats throughout her life. She was an independent and hard working woman. She was always willing to help friends and family. Geneva is survived by distant relatives and friends. She was preceded in death her parents and husband, two brothers Lawrence and Clarence Gabrielson. The funeral service for Geneva will be held at the Crossroads Care Center Chapel (formerly Weyauwega Health Care Center) on Tuesday, September 15, 2015 at 11:00 a.m. with Rev. Paul Brinkman officiating. Burial will be in Hobart Cemetery, Town of Royalton. A visitation for Geneva will be held at the chapel on Tuesday from 10 a.m. until the time of the service.

To order memorial trees or send flowers to the family in memory of Geneva Clara Woodard, please visit our flower store.