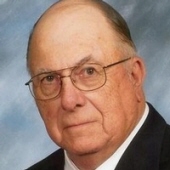 Gene Robert Forsythe, age 81, was reunited with our Lord and his beloved wife Barbara on December 10, 2016. He passed away peacefully at his home in Manawa, Wisconsin.

Gene was the youngest son of Henry and Carrie Forsythe. He grew up in the country near Iola, Wisconsin where he enjoyed the attentions of his older brother, David Forsythe and his two older sisters, Lorraine Strycharske and Ida Mae Gregerson. He also enjoyed the outdoors, basketball, spending time with friends and his grandfather, Joseph Knutson.

He graduated from Iola High School in 1952 at the young age of 17. He worked briefly in Milwaukee before deciding to follow his older brother David Forsythe’s footsteps into the United States Air Force.

Gene proudly served his country from 1952 until 1972. He was deployed to go to Korea but was diverted to Iwo Jima. On leave from the Air Force, he met Barbara Sue Klemm. They married in 1955 and traveled extensively together through the United States and Europe, raising three children along the way. Gene earned the rank of Master Sergeant and was deployed to Viet Nam. Although he distinguished himself throughout his military career, he truly believed the real heroes never came home.

In 1972, Gene began his 18 year service to the community as Chief of Police in Manawa. He set the ground work to develop the police department from a one man department to what it was to become in later years.

He further served his community by being on the Zion Lutheran Church Council, Manawa Lions Club President and City Council Member. He took special enjoyment in sponsoring the Manawa Police Girls Softball Team.

In later years, Gene and Barbara again developed a passion for traveling which took them to see family and friends throughout the United States and Ireland. They enjoyed spending the winters in Arizona always ready to return “home” in the spring. Surprisingly, Gene developed an artistic talent with wood working and stained glass. Not surprisingly, he took great joy in his children, grandchildren and great grandchild all by whom he will be deeply missed.

To order memorial trees or send flowers to the family in memory of Gene R. Forsythe, please visit our flower store.