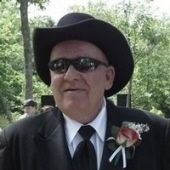 Age 73, of Manawa, formerly of Waupaca, went to his heavenly home on Saturday, March 11, 2017 at his residence. He was born on December 22, 1943 in Waupaca, son of the late Fritz and Helen (Taggart) Nelson. On December 21, 1968 he was united in marriage to Jeanette Fronzcak at First Presbyterian Church in Weyauwega. Gene graduated from Waupaca High School in 1961. He worked at Waupaca Foundry from 1963 to 1976, then at Tradewinds in Manawa for 16 years until it closed in 1993. He then worked at Wolf River Lumber for 10 years retiring in 2008. Gene loved playing pool and won various pool tournaments, he was proud to have beaten the famous Minnesota Fats in his hay day.

He was preceded in death by 4 brothers: Clifford, Sid, Paul and Gary Nelson; and also an infant sister.

The celebration of life service for Gene will be held on Thursday, March 16, 2017 at 1:00 p.m. at the Cline-Hanson-Dahlke Funeral Home in Weyauwega. Burial will be in Oakwood Cemetery, Weyauwega later this spring. A visitation for Gene will be held at the funeral home on Thursday from 11:30 a.m. until the time of the service. In lieu of flowers, a memorial fund has been established.

The family would like to thank Theda Care at Home Hospice for their care and concern of Gene.

To order memorial trees or send flowers to the family in memory of Gene I. Nelson, please visit our flower store.